What You Need To Know

When planning your next fishing trip in Northern Ontario, there are a few things that you will need to know. Ontario and Canadian residents living outside of Ontario will need both an Outdoors Card and a Fishing License to fish in Ontario. The applications for these are available online, and at many bait and tackle shops, some outfitters, as well as the district offices for the Ontario Ministry of Natural Resources.

Non-residents of Canada, will need to purchase a fishing license to fish in Ontario. This can be done online, through many outfitters, bait shops and some sporting goods stores.

Bringing your boat into Canada

You can either trailer or cruise your boat into Canada. Customs officers at border crossings will issue a permit. Some destinations offer remote area border crossing, and you can register via telephone. For more information contact Canadian Border Services.

An invaluable resource for the angler is the Ministry of Natural Resources & Forestry Fishing page. Here you will find information on obtaining a license, fishing seasons, zone maps, regulations and more.

For Canadian residents, the province of Ontario offers an opportunity to try out fishing Ontario waters without the mandatory Outdoors Card & Fishing License. The Ontario Family Fishing Weekend(s) is an exceptional opportunity to introduce a friend to the sport of angling!

Ontario is known world-wide for its large diversity of fish species. The top picks listed below are sport fish that regularly drawing anglers to our varied bodies of water. Click on the links to learn more.

Smallmouth Bass are prolific in the many water bodies of Ontario. They are a medium sized deep body fish, with green to olive back and sides with a yellow to white body. Average size is 1-3.5lbs (.45-1.58kg) with large ones topping the scales at 9.8lbs (4.5kg) Bass are prized by anglers for their strong fight and acrobatic jumps, making them an exciting fish to catch.

They favor clear rocky lakes and shorelines, rocky shoals, points and weed edges. Most active in the early morning or evening. In most of Ontario, Bass season opens the 4th Saturday in June. Best live bait for bass are frogs, leeches and minnows. Most effective lures are imitation crayfish, worms, jigs, crankbait, spinnerbait and surface lures. 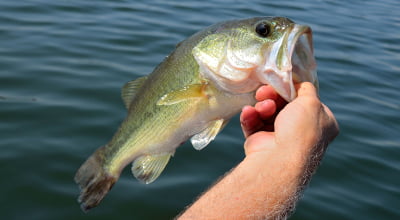 Medium sized deep bodied fish with green to olive back and sides and a deep notch between dorsal fins. The average size is 1.5-4lbs (.68-1.8kg) Trophy sizes reach upwards of 10.4lbs (4.7kg). Largemouth thrive in warm water bodies with shallow cover. In water bodies with varied habitat their territory may overlap with smallmouth bass.

Found in warm weedy water, clear rocky lakes and slow moving rivers, where they are often found in thick weeds or near sunken wood. Overhanging trees or docks provide optimal cover. Largemouth are most active early morning and late evening.

They are aggressive strikers and these strong fighting fish are attracted to artificial lures, such as topwater plugs, jigs, spinner’s crankbait, buzzbait and live bait like crayfish and minnows. 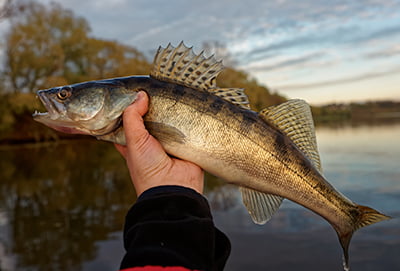 These prized gamefish are found province wide. The walleye is a cool water loving fish, has an elongated body with a white tip on the lower tail fin and a large mouth that extends beyond the back edge of its eye, with large sharp teeth. The walleye gets its name from its large eye with a light reflecting retina. Walleye prefer dark or cloudy water, so the best times to fish are early morning, evening in stained water or on cloudy overcast days.

Because these fish prefer cooler water, they are harder to catch in the summer months, they are at their most active in the spring and fall. During the day walleye are often found in deeper water over rocky bottoms or weedy cover. To catch them at depths the most effective method is to jig and drift, but you can also troll using deep diving crankbait, spinners and spoons. In the evening trolling with crankbait along rocky points, weedlines and drop off zones tends to attracts larger fish. The most effective live bait are leeches, worms, crayfish or minnows. Walleye are a schooling fish, so if you catch one, you can be sure there are more where that came from. 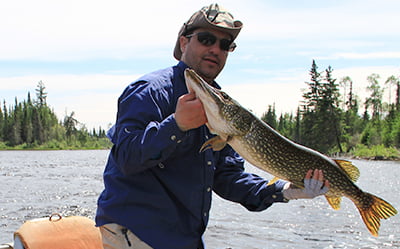 Pike have a large elongated body, and a pointed bill like face with sharp teeth. Sometimes confused with muskie, the northern pike has a caudal fin with rounded tips, while the muskie has pointed tips on the caudal fin. The average size is between 4-10lbs (1.8-4.5kg), with large trophy fish prowling the water that are upwards of 20lbs-30lbs (9kg-13.6kg) Weedy shallows, points, creek mouths and flats are prime habitat for this carnivorous fish.

When the water begins to warm, pike become less active and move under the cover of logs, weeds and spend time in drop offs & deeper water. Spring, early summer and fall are the best times to fish for large Northerns. In the fall they become especially active and move back to shallower waters around rocky bars, weedy shallows and below rapids in river and streams. Shiners, frogs and chubs make good live bait. The best lures for northern pike are bucktail spinners, noisy surface and diving lures, as well as large spoons.

Muskie are powerful fish with razor like teeth. Their average size is 10-20lbs (4.5-9kg), but monsters have been caught upwards of 70lbs (31.8kg). When fishing for muskie one can never be sure if you will reel in a good size fighter or a record breaking catch. Average size muskie can be found in July/August, but if you are fishing for your own river monster, the best time is when the season opens in June and again in the fall as the water temperatures begin to cool.

Found in sunken islands, weedbeds and current flows, they tend to be found at transition zones where the underwater landscape drops off. The best fishing times are early morning and evening when the baitfish are most active, and afternoons between 1-4pm. Live bait like, suckers, frogs and chubs work well.

Effective lures include large size surface or diving lures, bucktail spinners and spoons. It’s important to bring both landing and release equipment as their large size and sharp teeth mean care must be used to prevent injury to both angler and fish.

Light yellow body with vertical bands on sides. Considered panfish, along with sunfish, bluegill, bullheads, rock bass, these fish are a favorite catch for children and are often their first introduction to fishing.

Perch are more bottom oriented than crappie, they range in habitat from weedy areas to rocky shoals. The average size of a perch is .75lb (.34kg). 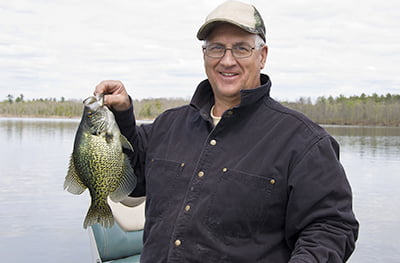 A type of panfish, along with sunfish, bluegill, bullheads, rock bass. These fish are a favorite catch for children and are often their first introduction to fishing. Black Crappie are a small, 0.5-3.8lbs (0.23-1.7kg) deep bodied fish, silver and blue with green mosaic pattern they resemble a cross between a rockbass and a sunfish.

These fish are found in schools through the southern Great Lakes to Northwestern Ontario. They favor warm clear, vegetated lakes, ponds and rivers, they access deeper water in the winter and summer. Black Crappie are active during the day, especially when the weather is overcast or at dawn and dusk.

The best fishing time is after the ice melts in late April/May when the Crappie follow schools of bait fish to shallower water. The most effective bait is small live minnows, nymphs, spinners, panfish jigs & small crankbait.

Slightly deep bodied fish with silvery sides and bottom, with 2 skin flaps between the nostrils and a deeply forked tail.

Found in big cold-water rivers and lakes, they usually feed on or near the bottom.

The average size is 4lbs (1.8kg) they are easiest to catch in the spring & winter and feed during the day. To catch them use minnows, teardrop jigs with rubber worms or small jigging lures.

A popular sportfish, with a white belly, light spots on a dark background and a deeply forked tail. The average size is 2-10lbs (1-5kg) with trophy sizes approaching 63.1lbs (28.6kg).

Found in cool lakes that are at least 50 feet deep, they can live upwards of 20 years. They can be found feeding near shore as the ice recedes, they then move to much deeper waters as the temperatures rise.

The best bait is large live minnows, or if you prefer lures, try deep water trolling with spinners, spoon, streamers and wet flies. 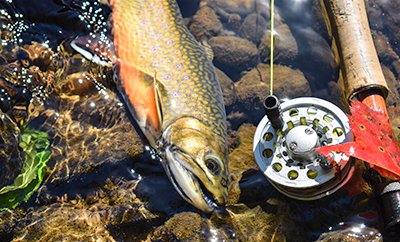 This medium sized fish, has an olive green to brown back with light spots on a dark background some blue, some red, white edge on lower fins set off with a black line and a square tail. They range in size from 1-3lbs (.45-1.36kg) with trophy sizes upwards of 14.5lbs (6.6kg).

Brook Trout are found in cold clear water with plenty of cover from overhanging branches, logs and rocks. Also found in streams with quiet pools between sections of fast water. Inland brook trout are most active during spring and fall, while river brook trout stay in cold pools near falls and rapids spreading out later in the spring and fall.

Brook trout love live bait, a split shot with a hook and worm is often an excellent way to catch them. They also go after minnows, leeches and insects. Artificial flies, spinners, spoons, plugs and small crankbaits also work well.

These cold water fish have a deep body, but appear thin from side to side. They have a blue or green back, silvery sides and a white belly. They range in size from 5-10lbs (2.25-4.5kg), with trophy sizes approaching 28.6lbs! Coho gather at the mouth of rivers in late summer and early fall before they migrate upstream to spawn.

Coho are a very popular sportfish due to their aggression, and feisty nature causing them to bite a wider range of bait and lures. They are usually caught near the surface, but these strong fish leap repeatedly and change direction quickly.

Down rigging and trolling is a popular method of catching these fish as well as deep trolling with plugs, spoons and bait. 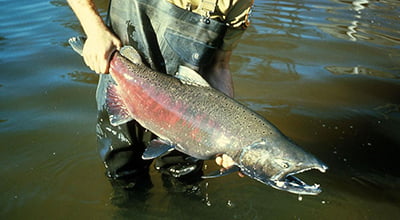 Chinook are elongated moderately deep bodied fish, with a blue or green back, silvery sides and a black mouth and gums. They range in size from 7-15lbs (3.1-6.8kg) with trophy sizes approaching 46.4lbs (21kg).

These fish spend most of the year in the Great Lakes, they gather at the mouths of rivers in the late summer and early fall before migrating upstream to spawn. This strong fishing fish is prized by anglers for its large size. The chinook are light sensitive so they are not inclined to feed on the surface.

They are aggressive and territorial, strongly striking lures. The best way to catch them is down rigging and deep trolling with plugs, spoons, deep flies and trolling bait.